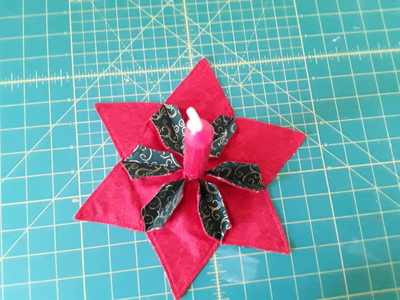 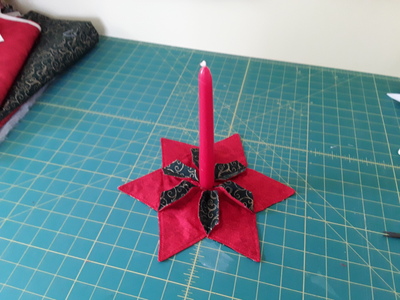 Love this one, how did you change the shape, it looks like a half hexi top with a diamond bottom..

I love this one! Luv Chris

Very pretty!
I liked the 6 part one as well. Have been thinking about an odd number like 5 or 9. But how to construct a 72 or 40 degree corner by hand, not to difficult in drawing or embroidery software. Have to attend a funeral today, so maybe during the weekend - we do have an extra hour as the clock is reset for winter time :)

Thank you. I think if I use the 5 units I would have to increase my pattern. Will give it a try

great for this type of candle!

Yes it is thank uou

I was going to digitise it, but I thought it would be quicker to make the old fashioned way.

I watched a few You Tubes videos, especially the 6 part one. Those were not made of squares like the 12 part ones but rather odd shaped which would be easier to do ITH. So I digitised one but have yet to stitch it. The paper shape I made worked well, now I have to stitch and assemble it.

This is really pretty. I'm with you on the battery operated candle, though. I've made myself a new rule- no leaving the kitchen anymore when something is on the range. I get distracted too easily. My DH says I chase squirrels. ;)

You remind me of a favourite saying of my Dads - "You're daft me duck you follow balloons." (Me duck is a term of endearment in some parts of England)

Lovely in the smaller version!

In the US, Dollar Tree has the battery ones. Hugs. Nan W

Please give us some measurements, I think this simple and so nice.

Meant to add in your inbox