Another project finished. This is done on an 11x14 stretched canvas. The file is from bettysoriginalembroideries. LOTS of stitches, but I really like the way the bees seem to pop out! Taking it to a friend in NC that does framing. 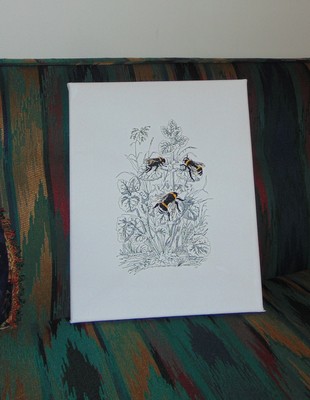 Beautiful. Read all remarks and thankful about it should I ever try.

Was the background design done in Metallic thread?

You should have 'signed' your art work! This is lovely and thanks for telling us. I bought some of these framed canvas and didn't use it for what I bought it for. This may be the perfect thing, but I am leary about the 'white stuff'......don't want to harm my machine.

Try one embroidering on the back instead of the front! I haven't had time to try it, but the other gal did & said she didn't have the white stuff then. Directions are below in another post. It DID make a mess & I had to really work to get it all cleaned...but am going to try again.

Thanks for the detailed how-to info!

fabulous project. Primed canvas is usually available on a bolt in the fabric department. That is if you already have a frame or other mounting apparatus.

OUSTANDING! Love it and I love Bees. Love Chris

well done Gerry! Your right they do "POP" quite a striking photo~hugs~

That is just lovely - will be perfect framed.

This is amazing. I love all of the details, even the veins in their tiny wings.

This is beautiful and yes the bees just pop very nice. As you did it on canvas what size needle did you use

Just gorgeous! I have that design and was wondering how it's look stitched out. It's like something you'd see in a bontanical book. Well done!

It does stitch out beautifully! Do you have any of the others...like the butterfly?

Can you explain how you did this? Was it embroidered then stretched onto the frame? Can't imagine how else you could do it.
Beautiful work.

I was wondering too

Here's what I did. I got the stretched canvas at craft store, unstabled it all around, then marked the center from each side of the final fold mark...where it actually started the front of the canvas..with water sol. marking pen so I could just touch it with a wet Q-tip to "erase" it. Hooped a piece of heavy cutaway, stuck the canvas to it, did NOT hoop the canvas. I used a size 14 emb. needle, but think a size 14 sharp would do better. Then I put it back on the stretcher bars, wrapping around tightly & staple in place. I did cut the stabilizer away from the fold, but left the rest on the back. One problem: I got little bits of white "stuff" from what I THINK is the preping of the canvas to paint on. Had to clean the machine out afterwards. BUT after talking to the gal that did one, she said she too got that white stuff, so she turned it over next time & emb. on the BACK side & no flakes. Haven't tried that yet. I did slow the machine down a notch as I was scared to death when I started this! But did like the final results!!

Thank you for the directions. Not sure I have the nerve to try this.

Go for it! You can get a smaller canvas & use just a redwork design until you are sure of it.

This came out beautiful. Do you mean artist canvas, the kind you paint on? Thank you, Please post pic when you frame it, that is going to be really fantastic.

Yes, artist canvas. Got it at AC Moore cheap!

This is really beautiful. Very clever design and so well executed. Bunch of flowers for Gerryb.

What a great looking piece of work

It's like a Botanical Gerry. It will look marvelous framed. Great job!/Lillian