Embroidered a premade scarf for myself as a test to see how well it would look for Christmas presents. Design from juju and scarf from a.c.moore


My new to me embroidery machine had to visit the hospital after only owning it 6 weeks. I sure hope it is not a sign to come 😥 But it explains why I had so much trouble with other projects this week.

Thanks for looking,
Hugs,
Lee 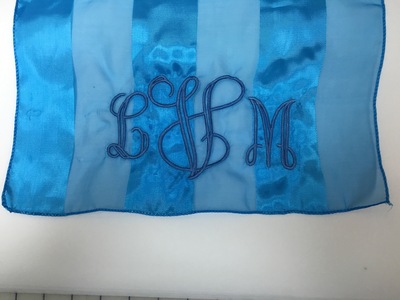 Thank you all so very much! I miss my Viking!

Great looking - Hope your problems are all fixed - Happy Embroidering :)

You did a beautiful job on some not-so-easy to embroider fabric.

This has turned out beautifully. Well done, love Chris

Looks great and hope the fix is for long machine life ahead.

Hope all your problems with the machine are sorted, it would be so frustrating after a short few weeks of use.However your scarf is super. Sandra.

Wow you did a great job with all the problems you were having.

Did they explain the problem? The scarf looks great! Kay

Wonderful look. What kind of machine? I think any correction should have been free at this point (under warranty).

It's a Viking designer diamond deluxe. They said this repair would be free as I started complaining about it occurring aft only owning it for two weeks and it progressively worsened.

It was shutting off during embroidery and restarting and not quite lining up where it was before it shut off. The feed dogs would not raise so that I could sew with it.....on and on.

They said it sounded like a motherboard problem. I was lucky that the scarf wasn't ruined but many other projects were this past week.

It looks great, should work really well for a present!

Looks really well done. Hopefully it is working perfect for you now.

I forgot to add that it was still wet when I took this photo. I was too impatient to wait!