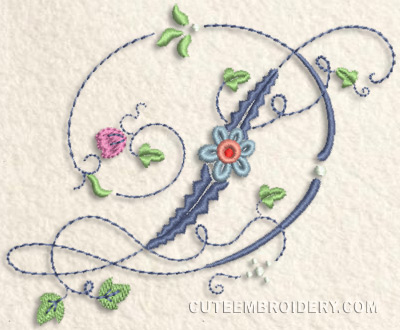 thank you for the letter D

Thank you again, this has to be a favorite.

I just took time to read the comments from everyone. I've been voting for every letter in this font for months and am pleased to see it come to the front. So far I have A, B, C and G and today D. I still vote for the letters I have so that others have a chance to get the letters they miss. Hope this helps you all.Other fonts I'd like to see are the Tulip and the Swan. Anyone else out there interested?

Please everyone vote for A today so that all of us that did not get it will have the opportunity. we can always wait another day for E right? thank you all

I got A two days running but no B ?

I got the LETTER A I have them all so far!

hi fellow sewing friends. None of us got the "A". The only way to be able to get it is to vote for it asap as the next letter. Otherwise, we will never get another chance and they will simply go on to another freebie pattern. I have been tracking the comments since this design was offered and nobody got an "A". If anyone out there did, please let us know. BUt i NEVER SAW

I got letter B two days in a row, and no letter A.

How did I miss getting letter C?

D is for Delightful Thanks Ms V :)

Vote for letter 'A', I missed.
Thank you!

Thank you! Love this font!!

Thank you very much for this dearie.

So beautiful, thank you!

Thank you so much, "D"elightful!

This monogram is so beautifully detailed!

Thank you. please vote for C.

How did you get the A emanresu?
I didn't see an opportunity to get it.

Thank you for the nice alphabet, especially, that everybody could get both beginning letters A and B.

Delightful D, thanks so much.

Pardon me, I now see that it is a white dot.
Sorry about that

This is a wonderful font, thank you so much for making it available to all.
Can you fix the defect from the smooth line on this D ?
Hugs, Bonnie