Today I finished a set of vintage flour sack dishtowels that will be a shower gift for my grandson and his bride-to-be. I hope that they find a use for them. I was going to make a set for myself and then I realized that I never dry dishes. I just leave them in the dishwasher to dry. 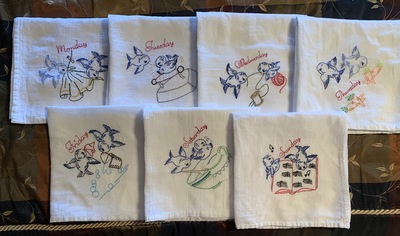 Flour sack dish towels are my favorite. Love the vintage designs. When I was about 8 years I started to hand embroidery, these look like some of those designs

My daughter in law and I were in a farm store and I saw a pkg of 2 flour sack towels. She's young and she asked me 'what do you do with them' and I said dry dishes. I bought some good 100% cotton in her new made over kitchen my son worked very hard on with new stuff and I am going to make one of those snap on towel holders and a towel of a gray mute print color and line design [uh oh, another project to do] and give her as a gift. I know she will only use it for decoration over the range or dishwasher handle though. Great job on these. We have to tell some younger generations what things are sometimes.

I love this type of embroidery, did it myself by hand way before machine embroidery. Lovely present and a great job, well done.

I expect this question may have been asked before, but here goes anyway, what are flour sacks, and are the available in Australia???

From the 1800’s to around 1950, food staples such as flour, sugar, cornmeal, and chicken feed were packaged in tightly woven 50 or 100 pound cotton sacks. During the American Great Depression, between 1929 and the late 1930’s, early 1940’s, everything was hard to come by. Frugal housewives would re-use these cotton sacks and make them into clothing, toys, quilts, curtains, pillowcases, undergarment, and of course, dish towels. The re-use of flour sack towels became wide spread, and the flour companies took advantage of this trend by printing the sacks with flower prints, pretty borders, and doll and toy patterns to encourage housewives to buy their brand of flour. Women would swap and sell the sacks to one another to obtain a particular print or pattern.

In the mid to late 1950’s, flour companies began using a cheaper method of packaging, paper sacks, and with the growth of new prosperity in America, the re-use of flour sack towels went by the wayside.

Flour sack towels are making a comeback today. They are not easy to find but can be purchased in some dollar stores, drug and hardware stores. It is a shame that they are not more readily available. As a kitchen towel, flour sack towels are far superior to a terry dish towel most commonly seen today. They are lint free, dry quickly, wash beautifully and can be used for a variety of household uses and craft projects. I don't know if they were ever popular in Australia or if you can buy them there.

Thank you for answering my question, it made for very interesting reading. I had often wondered what flour sacks were and now I know.

I don't think I have ever seen flour in a "cotton" bag here in Australia. I have seen a very large bag of rice in a cotton bag, as there is only two of us I doubt if I would ever buy or in fact use such a large amount of rice. Plus it had red writing all over it, and I doubt if it would wash out.

Very nice gift. I think most people who receives a machine embroidery gift from me use them for display. Love flour sacks! Are the towels vintage or the design?

The designs are vintage, reminiscent of those that I did by hand when I was a young girl.

I have a weakness for this style of ME on tea towels and yours are beautifully created! I guess it's because my mother hand stitched this type of designs on her towels. You just never know how something simple as a towel can remain in the hearts of the next generation of family members.

Oh i love them and i like this kind of teatowel to:):)

A lovely set. Congratulations on the upcoming marriage.

No they won't use them to dry with , they will use them to proudly display as a decoration in their kitchen. What memories and treasure that will be.
You did a wonderful job and know you have to be pleased how they turned out.

Great g ift for the household. Flour sack towels are great, specially when a sweet embroidery is put on them.

Those are so cute!