Sorry but a little worried by this:

Clipartopolis.com is a very popular site for amateur and professional embroidery digitizers to go to for clipart on which to base their designs and I always believed they had an honest reputation and it was ok to use clipart from them to digitize designs to share and/or sell.
However, some of the designs in their latest "Golden Felines Set" - especially the first feline very closely resembles a well-known Disney character. Would embroidery digitizers get into trouble from Disney if they created and sold a design based on this clipart?

My previous comment has been removed, perhaps because I posted a picture to compare the lion in this set to the lions in the Lion King. Just google the lion king characters and you can find the pictures yourself. Each of the lions in the Lion King has definite personality that the Lion in this set does not have. Mufasa's eyes are sharp, his chin strong, his mane has a distinctive look and his nose is totally different. Sure, they both look like lions, but Disney doesn't have a copyright on all cartoon lions. If you have a question about the set, I suggest you contact Clipartoon and ask them. I doubt they want a lawsuit either.

Thanks for your opinion - it is appreciated. My concern is still that, to my eyes, the resemblance is still very much there; the shape, angulations and proportions seem very close to that of the animated character, and I have seen a lot of cartoon drawings of lions that are no where near as obvious to me as this one but my eye sight might not be as good as yours.
I HAVE CONTACTED CLIPARTOPOLIS, but have not received a reply as yet.

If you get a reply, I hope you let us know what they have to say. I'm quite interested in their reply. Thanks.

I just went to their site----those designs "GoldenFelinesSet" were still showing---I do not do much "digitizing" so I am not familiar with the process of getting art and converting it into a design---but these do look a lot like Disney to me---but I am NO EXPERT!!!!!!!!!! I am VERY cautious with anything Disney or what possibly could be copyrighted. Better to be safe and cautious. The info found on Cuties has taught me SOOOOOOOOOOO much about this type of knowledge. God bless Y'all!

Thanks for your opinion.

I think that the very first design is the Lion King. Close enough that Disney would have a case if they chose to pursue it.

Thanks for your opinion.

What do you think? 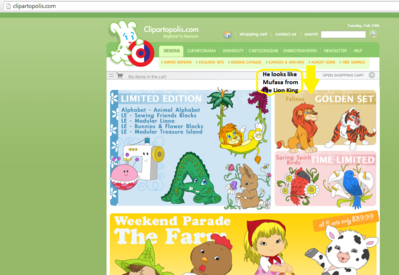 Hmmm, I just did a search on their site for "Golden" and again for "Felines" and the search came up blank...perhaps they have taken them down ???

You'll see the Gold Set under the Limited Editions tab on their web site - it's still there and any advice would be appreciated.

I am no expert on copyright laws, but I have to agree with you. They do look a lot like certain Disney characters. It is my opinion that yes the digitizer could get in trouble if they digitized these and sold the designs. It is the digitizer's responsibility to make sure that they are not using copyrighted designs.

just as it is our responsibility to make sure that we're not dl & using copyrighted designs digitized by others. *4u

thanks for your opinion