Just outside the bedroom window. Watched the bear doing this at 12:30 last night. The rest of the stuff out of the garbage can is all over the back yard. On all 4s the bear's back was almost to the bottom of the window. Took off almost the whole side of the shed. The joys and pleasures of living in the woods. 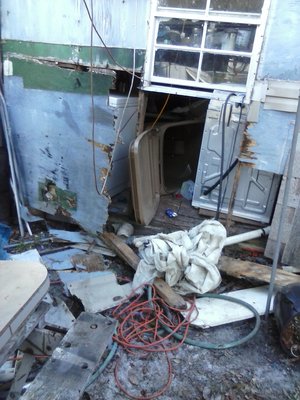 Silly me. I thought this was bad a few years ago. Just ripped the door half off. We have this old trailer on the property for storage. Not very secure now. 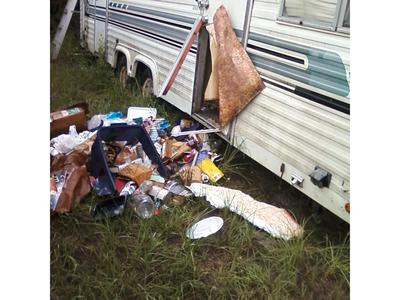 Oh my gosh, and I thought our raccoons were destructive...
does this same bear keep coming? Maybe a wildlife expert could trap it and relocate it?

Probably the same. Been told there are about 6 within the 200 miles. They won't do anything unless it attacks a human. I understand it. They were here first. We're the intruders. Understand, but don't have to like it. Always into something. That was one big bugger the other night. First one I've seen on this property. Have seen many along the roads. One was about 5 miles from a major supermarket in town. They aren't afraid of anything. And people actually feed them, which is not legal.

Our closest neighbor looked out her bathroom window one day and there was mom and 2 cubs in the tree watching the window. We both think this one is "camping" on this 2 and a half acres. The back is virgin woods. Part of the front is the same. But considering renting a bull dozier.

I live in the forest and sometimes have bear problems too. One recently jumped up on my propane tank, bending the gas feed line down flat so it had to be replaced, then jumped over our 6' wood fence and broke down a whole section of it, and then jumped on top of my car and caved in the roof. Then it tried to get the garbage can lid off. The lid was chewed to bits, but I bungee the lids so they are animal resistant. Neighbor caught the whole thing on video. I'm not real fond of bears. I won't walk my dog at night because of them. She is 115 pounds, and is not afraid to challenge anything.
You might want to spray bear spray around your shed so the bear doesn't come back for a second helping. Good luck! At least it wasn't your house?? :)

Didn't know about bear spray, will look into that. Even 115 pound dog is a snack for a black bear. And every time I hear anything at night now, I reach for the shot gun.

I am sure as a person not only living in the woods, but with all the problems the area has been having with the bears you likely already do this but will mention just in case others may need the information, ...
Now that he has found your place, if he was able to get any really good garbage then chances are he will be back. Since it looks like he made short work of your shed wall then you probably need to find a different place to put your garbage that is safe from him getting at it. When we use to go camping in areas with bear we always had to make sure the BBQ was loaded back into the van and any food leftovers and garbage was removed from the campsite. Saw too may people who would put the food in the tent with themselves, yes very VERY not smart, so hopefully your garbage was not that appealing to him and you have no BBQ or other items left where he has a chance of getting at them. I would be taking more than pepper spray if I was going out at night and if you must go out make lots of noise. Hope you do not have a chance to meet Mr Bear Day, or night!

There are no safe places to keep him from getting in. Tore the door off our old travel trailer where we used to keep it. Going to build a pen and put an electric fence around it. Game and fish said that "might" keep it out.

Thank Goodness this is one problem that we do not have in Australia.

oh my goodness thank heavens no one was hurt!~hugs~

They have been attacking people everywhere. Put 8 down in the last month. Just don't do that, well, haven't been doing it. Scares the heck out of me.

Just too scary for me. I'd be running North!

Problem there is I have bad legs and can't run. Besides it's cold up there.

Wow! What a huge bear to have reached the bottom of the window and when it was on all 4's! I'm so glad you weren't hurt, be careful when cleaning up the rubbish. Good luck, love Chris

Figure it was a good4 and a half feet on all 4s. Would not like to see it on it's back legs. I do not like bears. FL game and fish said the first one we had years ago was at least 450 # based on the footprints I sent and the measurements. That was enough for me. The thing is they are protected. Don't shoot one, you're going to be fined if lucky, or fine and jail time. If the sucker starts at me, he's dead. One man shot one and then buried it in his yard. OMG did he get in big trouble. Not me. I'd call the law and tell them what happened. Ain't gonna fight a bear. I might be old, but not stupid.

I would not have slept the rest of the night or maybe a few nights. We had a bear get into some trash in the back of the truck up at the cabin. At least we assume it was a bear, as we did not have the opportunity to see it.

BE thankful. God was with you.

bears here a asleep how come yours aren't???

wow scary the strength of an animal yhat look so cudly

Some how, I don't really think cuddly when it comes to bears. They have been attacking humans this year in droves. Put 8 down so far and that's a first.

Be safe while you are cleaning up - it looks pretty scary to me.

It is. And there is one man in the area who says he hand feeds one. One of these days he's going to feed him his hand. Nuts.

Wild life is just that WILD. Glad you were on the inside and not out in the shed. Use gloves and be careful when cleaning up.

Yowza...glad you were inside and the bear was outside...what a mess!

Oh my!! what a mess. Be careful cleaning up!! Suzanne

Do not go outside at night unless it's an emergency. Then the pepper spray is in my hand, ready to go. Remember once many years ago we had a freeze. Told my hubby at about 5 to go turn the water on outside. I'm not afraid of the dark. 9 pm, going to turn the water on. Leave the door open in case you need to run inside. 2 minutes later here comes my brave man. Ran in, slammed the door and the barrel bolt. What was it? Don't know but it was big and fast. Next night at 5, don't you think......... He was already out the door.

oh dear, glad you are okay. Looks very frightening to me.

looks scary to me. Hope that you are okay.

I used to live amongst the bears. Those were thrilling times!
I am just thankful your home is built better than your shed...I am glad you are OK

Yikes! Glad you were inside watching out.