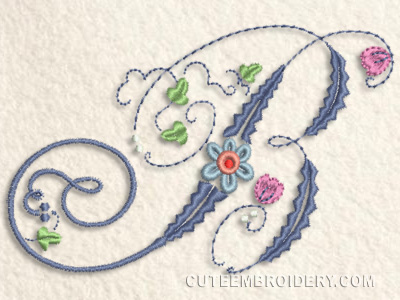 I am missing the "M" from the previous run & that's my niece's & my initial. Please help me vote for it. Thanks. Maria Elena

Thank you so much for B, Please Please vote for C and F that I am missing.

Thank you for a beautiful alphabet! One letter to go--rerun J!!!

Please vote for the X, thanks a lot

thank you very much for the B

So suitable for my grandaughter Bianca thank you so much

This would be my next pick. Love this floral letter!
Thank you so much for these chances for a free design!

Love this style of letters - so cute!

Beautiful! Thank you so much!

Just beautiful, I so appreciate all your free designs. Leila

this is a beautiful letter pattern Thank you

thank you for the lovely letter

Thank you, very fancy B

awesome.
that's my initial. thank you these re beauties.

Thank you for the elegant B.
Morinda

I vote for this one

I vote for this one!

Thank you, the alphabet is beautiful, but I need the letters B and C. Could you put again, please?

Why is today a repeat of yesterday? Can't wait for more of this ABC.

Not usually a monogram fan, but this is beautiful!! Thank you...

Thank you! This is such a beautiful set. I can't wait to stitch it out.

B is for Beautiful. Thanks again Ms V ")

thanks for the B, but the A was never offered. This probably was a computer glich on your end, so can you please give us an A so we can complete this set (monogramfont11)
thanks again. I noticed others have missed it as well.

Beautyfull alphabet, but it seems I lost letter "A", ¿Could you put again, please?

Absolutely beautiful! I love this font because it is delicate and classy! Thank you!
Jacque

Beautiful B, thank you.

thank you I think this is my favorite font so far

thank you - the design is beautiful

Thanks! We are so blessed to receive these....GiseleGloria

I never got an e-mail about the new free alpha like I do sometimes and I never saw the Letter A for the short time it was up. I voted for the Letter A yesterday as did many others and the B is up again today for the second day in a row. Please vote for the Letter A so we can all get it! Thanks!

Thank you for the Beautiful B.

Beautiful alphabet, but why the B again today? I and many other voted for the A but it hasn't been available for a whole day as far as I have seen.

So beautiful,thanks ever so much

thank you for lovely design

Can you edit to a smaller 4"x4" version. I love it, but can't use it this size

Love this font, it is absolutely gorgeous! Thanks so much!

Very pretty. Thank you very much.

Absolutely a beautiful and lovely font. Thank you.

Thanks absolutely "B"eautiful! (Would love to have the A - did not see it!)

This is a lovely new set of alphabet - just a pity we have not yet received the A - Thank you very much. Hoping that we will be able to finish this set as well.

Thank you for this beautiful alphabet.

Think the A gets put up in the middle of the night.lol. I only got the A earlier, not there yesterday. Not a good business practice to do this every new alphabet.

I love this alphabet. Where do I get I thru Z? Betty blhlady@hotmail.com

Thank you. It's pretty and powerful and the same time.

Absolutely love this new font - totally missed "A". It was there and then it disappeared :(

Say what happened to A? I downloaded Z yesterday (Sunday) and today is the B in new alphabet. But Thank you very much for the new Alpha!

Love this new freebie alpha.... but PLEASE... why did it start with B again? Will we get the A?

Looks like a lovely series, but have I missed A

Thank you very much, but I did`t see the "A".
Gigimaus