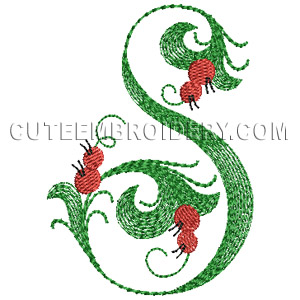 So glad to see this older font come up...especially with Christmas getting closer!! Avis

My GD's name is Sofie . She will love this letter. Thanks so much .

These are sew exquisite!!!! Thank you for the S fonte and for being sew generous!!!

Are we quiting the Berry font? We would like to have the rest.

Thankyou so much for the letter S.It is my grandaughters name. she will love it. thankyou for the designs. they are all lovely.

Thank you for repeating the berry font.I was finally able to get the ones I missed.Great designs,all of them.Thank you, again.

I hope we can finish the berry font before starting the next one. I still need T, U V W X Z and A B. Thank you Cloey

This is perfect for me.

thank you for the letter it is great
Brandy

I have waited (patiently) for the next alphabet, while others are getting caught up, and now to see the beautiful AutumnFont, I just cant wait to start sewing it Thank you so muchly! Gramsbear...

Thank you very much.
SusieQ

Many thanks much appreciated

thank you very much for the lovely alphabet, but i was wondering what happen to the letter t, i downloaded the s yesterday, and it's still there. just wondering don't want to miss the letter t
thanks again for all of your hard working in all the alphabe

Beautiful letter. Thanks, so much!

Sew Beautiful, CuteEmbroidery have you guessed we LOVE your Designs?
Many thanks Kezza

Thank you for this wonderful alphabet

Thank you for the S

S so smart for Sharing with us all thank you

Thank you will deffently use this super S as is part of Grand kids name.

thanx this alphabet is so pretty

Thank you for the S
These are great ...

thanks for these beautiful letters.
diane030753

THank you My name starts with s

Thank you. My name starts with S and this will look lovely on a pocket.

Thank you, all 3 kids name starts with S. hannek

THanks I love it

S is super and special. Thanks.

So---So---Pretty! Definitely will use thiS one aS there are a lot of S nameS in my family:-)

Thank you for the nice freebies. Love the berry ABC's

Thank you for the beautiful S

Thank you for my letter it's supurb