blown tire, not just flat...but just about falling off the wheel. He saw her get out of her car and noticed that she was pregnant. So he turned around and went back to the station to change her tire. She had just purchased all four new ones last week. She offered to buy him a case of beer or take some cash BUT he refused....he told her that he hoped that IF that ever happened to his fiance (soon to be wife) that someone would do the same for her. I can't tell you how BIG my heart felt when he told me what he had done.

wow, you sure can be proud of the way you educated your son,and the way he helped!! compliments to your son,
"in giving we receive the greatest gift"

What a tribute to a great guy AND the Mother who raised him that way! I'd be proud too.
Give that guy a hug from me!
Meri

There really ARE some nice people left in the world. Your son is one of them.

There are still a group of good old fashioned gentlemen out there. You taught him well. It does make us proud when our children stop and help someone.

Entertaining angels unaware.......;) Thanks for sharing this with us Barb, he should be proud to have you for a mother and I KNOW you are proud (and rightly so) to have him for a son.;)

He makes his Mom proud!

God always put special people around people that is in need and at that moment God knew how special your son is. Oh what a blessing. Thank you for sharing with us.

A wonderful mother who raised a wonderful child. You have all the right in the world to be very proud of him.

I am glad to hear he declined her offer of payment. Just doing something that is right is payment enough. Good for him, good for you for raising him to be the man he is.

And you should be proud - sometimes we don't hear about the kindness our children have shown for others. I have 3 children and they have all done something for someone else that I found out about accidentally - I was proud of them and then asked how come they didn't tell me - they just shrugged it off saying it was nothing. Not everyone would go to the trouble your son did - nice to know there is still good ones out there.

THANKS TO YOUR SON,HE SURE IS A GENTLEMAN..YOU RASED HIM WELL,,, LUCY

Barb you raised him right.This was a wonderful thing for him to do, his heart is definitely in the right place. So much of the people in the world today think only of themselves & pass others by when they need help. You never know u may be helping someone God has put in your path, an angel unawares. You have every right to be proud, he sounds like a marvelous young man./Lillian

I feel so proud of him too. I started to cry.

Doesn't it make a parent proud knowing you have raised a wonderful person. (Being boy or girl, when they help others.) A pat on the back to you, Barb. We have raised our kids to be that way also. Hugs Lynn

Barb, as well as you should be proud - he is surely a rare man in this world - thank him for all of us - tell him - we admire him - he is right when he said that he oped that if that every happened to his fiance - that someone migh help her, too. Hopefully - they will never need to find that out. What a man!

Barb; he's a real gem; glad he's engaged and knows how to respect a lady. 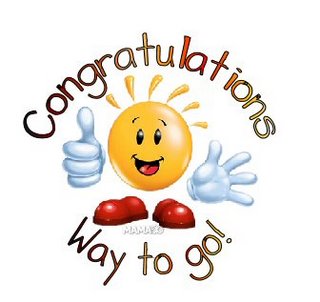 That is one special man. I would hope that my boys would respond with that type of care and concern Actually I know they already have. It is a credit to mom and dad who raised them with respect for others. Blessings and peace to you and your family.
Cindy B.

Sweet boy you have there. I know you are proud.

Barb you have raised one very special kind and loving young man, if only there were more like him in this crazy mixed up world. Go ahead and be proud. :)

And this was 'nobel' of him, we all too, hope that we would find such a 'man' if we were in the same situation!

Thanks for sharing! You deserve some of the credit as you must have given him his values in life. Well done! Thank him from all of us Cuties.

We need some more young people like that. Thank you for sharing and you have a perfect right ot be proud.

Give him a big thank you for all of us women that have needed a helping hand from time to time.

Tell him there's a whole bunch of strangers that are proud of him too!! He's made our day!

Barb, I am so proud of him and for you! Please praise him for all of us! There are so few people left in this world that are willing to take time to be nice. I can tell he had the right kind of upbringing and has stuck by it! hugs, Linda P.S. this new avatar is of my son and his youngest step grandson taken last Sunday. He is wonderful with the 3 grands.

Wonderful story and quite right to feel proud as can be.

It is so good to see that there are people in this ME, Me world who see others. Good for him and lucky fiance to be marrying a man like your son. And a big pat on your back for doing such a good job in raising him.

You should be very proud. I can remember so many things that my son has done for others out of the goodness of his heart and I would be the happiest person on this earth if I could just see that kindness come from his heart again. He has lost his way since his Heart Attack and my heart just breaks for him. He will do something once in a while that makes me think that he has regained his humanity but most of the time he is so angry at the world that he can not find his softer side. Of course, I am the # 1 target for all of his anger and as of lately, I have tried to stay out of his way. He is doing everything he can to make life very hard for me and at times he even scares me. No, I am not sfraid of him, I am afraid FOR him.
It is such a nice feeling when you know you have raised a loving thoughtful child and so sad when they lose their way! You are very lucky and did a great job raising your son! Hugs, Linda

Is he in a support group? It sounds like he is terrified of dying, but doesn't know how to help himself or make it better. If he won't join or seek counseling, try to find a support person or group for yourself. Who knows, he might see the difference in you and then find help for himself.

I have tried everything and it has not worked! He just gets worse when I try to intervene. I have one of his longtime friends seeing him next week but since he found out what I did, he will not even speak to me. Of course, the peace and quiet is welcomed at this time! He has a nice wife but she is one of those kind that just agrees with everything he says even if she knows he is wrong. This is her 2nd marriage and her 1st(26 yrs) were filled with nothing but trouble and chaos. She makes no waves. He uses his wife to get by with everything. "She agrees with me"! I get so tired of him saying that! Everyone is wrong but him! She will not argue with him about anything nor will she try to get help for him. The only thing that I have heard her say was that he was no longer on his Diet (DR'S) and that she was scared for his health. He has gained back all of his weight from just before the H.A. He has turned back into a junk food-a-holic!

How wonderful Barb and I know how proud you must feel.

My dear Trevor helped a lady out early last week and he came home with a bad back LOL! I think he thought his body was in better condition than he thought. He changed her tyre, but he said the nuts holding the tyre on was so tight he wrenched a muscle in his lower back - OUCH! big time!

Oh! well it's gentlemen like ours that make this world a better place.

Tell him from me a big thankyou

Dearest Barb, you should really be very proud of your son, his heart is caring and kind, so difficult to find someone like him nowadays. Love to you, Yoriko