I was thinking of a vertical simple design. I will post a picture of the blouse, (sorry the pic is blurry) my photographer is working today. I would appreciate any suggestions. Darlene

Put a cute little fish over the stain and bubbles going up over the sholder.would be cute. Please post a picture when you get it finished will be nice to know what you do.

Hee hee hee, I'm rolling on the floor!! I'm no good at stains, getting them OUT that is, getting them is no problem. So, I just had to see why this question got 21 answers, and what they were. Ladies, you are just toooooo much! Sorry, I'll go with the tassels, I'm not much help, hee hee hee. Hugs, Marji

Darlene - hope your sense of humor is strong enough to take all our joking with your ink spot.

Oh yes, it's strong, has to be to be married to my husband!

that's a spot: I suggest a few butterflies, and 0ne of them on the spot.

O.K. why not make is really obvious and put an

only joking of course!

Love this pic. Where did u get it?

Have you tried Hair spray. Sometimes it works.

I got set in ink spots out of a shirt using aerosol hair spray..saturate it with the spray then dab with clean paper towel...make sure you have paper towel on the inside so it doesn't bleed thru..IF that doesn't work...I think you should stitch a 3inch daisy on each side of the button up...and then stitch the words "Please don't eat the Daisy's" I had a t-shirt like that when I was a teenager...MANY years AGO!!!

I know this is going to sound funny,,but try vodca,,i got a wine spill on the carpet took it GOOD LUCK

Don't have anything to add. Everyone has given you some good advice. And some witty answers. Love it. Mildred

You could put a patch over it that says "There is a stain under here".

Darlene I can recommend hairspray it works. Love Marie

I like the idea of cascading applique designs from higher up to the spot. *4U

Try spraying the spot with hair spray before you decide to cover it up. I removed ink for an entire ballpoint pen that had leaked all over my husbands shirt. Not a spot remained. Give it a try first.

I believe I would try some sort of applique cascade dd after looking at the shirt.

A tassel!, A tassel! ! I like that idea. LOL Okay the cascade sounded like something I would do, but would try to get the spot out with somekind of ink remover. If you can wear this in fall & winter some cascading fall leaves would look great.

Like minds - the first thing that came to mind for me was the tassel!!!

He He He I gave my step mom a pair of tassels & my dad a crocheted sock(I'll not say what the sock was for but it had a tassel also) for their 50th wedding anniversary. They r both gone now but my dad had a fit over the tassels. It was the hit of the big party they had. Of course my 3 half-sisters didn't think it was all that funny but they are stick in the muds. LOL

ROTFLMBO - I can just see your Dad's face when you gave him the "Peter warmer". We call them that over here in Australia. I think you are hilarious Lillian and have a great sense of humour.

The real funny thing Chris I put a roll of quarters in it & when he tried to take it out of the box it kept stretching longer & longer. All the men broke up laughing. I made a lot of bucks yrs ago knitting & crocheting them, putting a bell or tassel on them & my husband was taking them to the factory where he worked & selling them in Nov. & dec. They were buying them for christmas gifts.

That's a hoot. We used to know a wonderful guy who was extremely 'manly' in actions, appearance, etc. The great thing was that he also was a ballet dancer (he played the prince when his daughter was young and they were doing Swan Lake) - anyway, when he turned 50 I took a pair of dance tights and added a knee-high in front. I'll bet he still has that displayed. Love the quarter idea. Are we going to get kicked off here????????? :-)

No way, not if I can help it! Hee hee hee, I haven't been this entertained in a long time. And that's saying a lot, because right now I'm watching Bill Engvall stand-up comedy! Hugs, Marji

Considering where the stain is located, it's to low for a pocket. I agree with Sarah, a cascade of applique flowers and butterflies from the shoulder to the stain would look very nice.

try "cordova stain devil" made for ink. available at handcocks and many other places, worked for me. also "goop" hand cleaner and stain remover.

You could put a tassel there and one on the other side, LOL! The sewing dancer! Just kidding!

Merci beaucoup; glad you posted the question; all of the answers seem great!
*4ALL!
Jacqueline

Have you tried alcohol on the ink spot. It may take it out, I don't know if it will if you have already washed it. But I would try it.

No No No ..... you can't use alcohol onthe ink spot, you miust drink it and then try to take the spot out LOL. Love Marie

LOL! That would be de-natured alcohol for the stain. Not the drinking kind.

Have you tried getting it out with a Tide pen? It will usually take out ink and does not remove the color. Or you could do a vertical stack of applique shapes. I used applique hearts on my granddaughters jeans leg and just alternated direction of the patch. My machine does not have the function to change directions by degrees so I just moved my fabric each time. It worked! Good luck. Sarah

You could make a running design of a simple graphic like various size circles in strategically random placement.

Another option would be a monogram.
Blessings.

How about just tie dye the thing & make yer husband wear it! I hear he LOVES those things...

The last comment was made by my husband. I'm gonna tie dye his buttocks!

I think our husbands could be related... it's just the sort of comment mine would make...lol..

The green sticker is where the spot is. 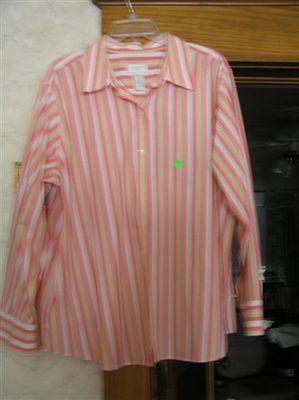 You could add a pocket on top in a colour that matches in with one of the stripes....
(it isn't a good spot, is it...LOL)
Reg