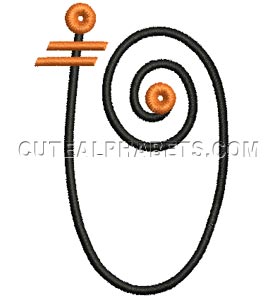 Thank you for the beautiful alphabet.
Boricua

i am still need M

I love these alphas - but I get sooo confused. If it's allowed, could someone send me "L" and "P" in PES. For some reason, I never got these. Thanks.

V is up for voting. T has been posted twice. The site has had problems this week. Looks like all is fixed now. Usually letters are posted for at least 24 hours.

It would be Very nice of you to post the letter V for Voting purposes tomorrow---if not today :-)

Hey Judy, It's ok. We all make mistakes and the good thing about your mistake is that now others know too.
Sylvia

I just wanted to apologize to the group for something that I did wrong. I am fairly new to the group and had missed the beginning of this alphabet because I kept going to cutealphabets.com I had seen many posts requesting missing letters and no negative

Thank U for letter U. Am Very anxious to see you post V Very soon:-)

What happened to the T? Did I miss it?

Yes! It is ILLEGAL to share a design! There are copyright laws!(Talking JAIL TIME!) One can direct others to let them know where they can download it for themselves, but it is illegal to send/share or do anything like that! As they say,"You snooze,You LOS

Thanks for the letters

Someone please send me the Q,R,&S. I was out of town. sandshardy@aol.com Love this!

Ahhhh. This happened before with another letter. I just went to vote for V and it is not to be found. I guess T it is so everyone can get it.

I got T yesterday and when I went back later it wasn't in my files. Had to get it again. I don't know what happened.

I missed the letter "T" also and i know it has not been up. I visit this site daily - it is the first thing I do as my time zone means I have to "Aussie here" I hope you can let us all have the letter "T" Thankyou for a great site

I am crazy for this alphabet and did not get the T. Went from S to U. Please let us ALL have the T. I tryed to get on the site earlier today and it would not open, that is not my fault!

Ther are not the letter T

Reply to Edithe I don't think they care, give me give me give me, is what it is all about. I for one will not share designs, I am surprise they are still giving them away. I look for the site owner to stop the freebies eventually because of the sharing. S

Why are some people asking to be sent missing letters? Do they not realize that is illegal?

some how I missed the t, but I have downloaded the letters everyday and don't remember seeing the t. please help, thanks for the u they are a great alphabet. thank you.

U are so nice to Us. Please be Very nice to us and post the letter U next.

thanks for the U - is this a bonus today? I logged in earlier and downloaded the T...... good thing I came back to the site! thanks again.

I missed the T also. Will vote for it.

please can anyone send me the R in JEF format, i somehow missed it and have been waiting for it as my last name starts with R....can send to trish_rencoret@yahoo.com thanks for your help!

The "T" was available for only a few hours.

S was Wednesday. T seems to have been skipped. Maybe tomorrow

Did this happen before? I couldn't have missed the T! Wasn't the S just yesterday?

Today is Thursday, Auguat 16th. Did I miss the letter T.

some how missed the T have the S as the letter of the 16th ?

I missed the letter T in vip format.
Can someone help me pleas send them to me. adavanrossum@zonnet.nl Thank you all so much.

Somehow, I also have missed 3 letters. Not sure if they have been posted for I have checked every day? I need the letters F, L, T. If it is okay, would someone please send them to me? honeebee52@yahoo.com Thank you all so much. Love the alphabet!

I, somehow, failed to download "t". Please, I need your help in the pes design. Thanking you in advance. Brn2btl@Bellsouth.net

U are posting a terrific alphabet. U bet I like it:-)