===========================
Hi Cuties, I had my Brother Innovis 1500D, machine running, stitching out some luggage tags when it decided to stop with a loud churning sound. The error message was something about thread being clogged. My son who is quite handy with electronic fixing, took all of 2 hours to fix the problem and that was mostly because it was the first time opening the machine and learning how to undo the parts.
Once opened we both admired all the wires we saw (Picture 1), my son commented that the machine was so digitally advanced....
Any way we only had to remove the outer casing and not remove the actual wires or moving parts. The thread was stuck in the gears (Picture 2 and 3) which we removed with tweasers and a pipe cleaner. He then also sprayed all moving parts with WD40....
This was the first time we opened my machine so as we undid screws, my son took pictures as he continued. There were three sets of wires to be unpluged so they got special attention as to where they were and how pluged in.
After closing and doing a test I found out that my son forgot to reconnect the automatic threader but it was a very simple fix and quickly done.
IF your machine is no longer under warranty!!
I just thought to let all the Cuties know that if they have handy men around, who "KNOW" what they are doing, don't be afraid to let them look at your machines!!
OH, my son is also my computer genius he he
3 images:[1] 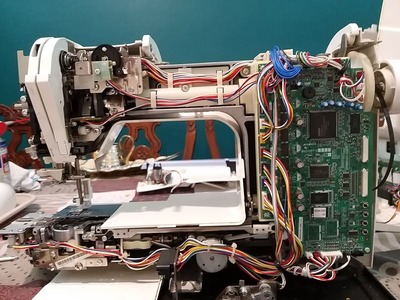 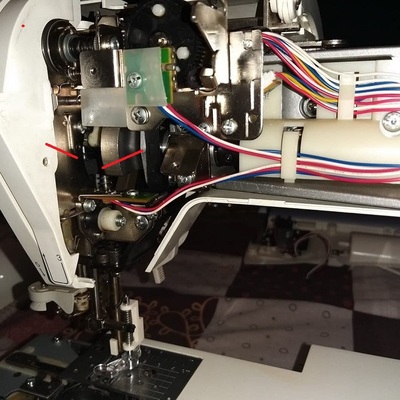 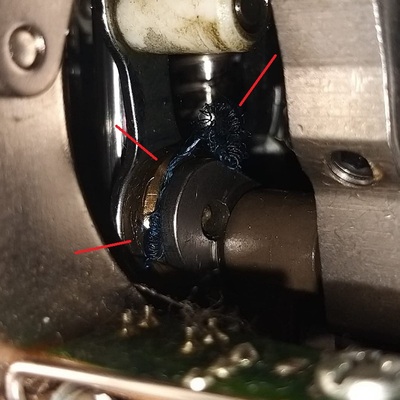 ttt for the weekenders

I am glad you got your thread bind out. Living far from sewing repair shops must be difficult.
Please note, a friend of mine repairs machines. WD40 is a water displacement product. It will not lubricate your machine for long. The factory and repair persons use a special grease (more like a petroleum jelly than an oil) to make it not need regular user oiling.

Thank you for the info about oil and grease... great for next time!!

Wow, they are a complicated piece of machinery and electronics. You must be very proud of you son to save the day. Thank you for posting these pictures.

I LOVE seeing the insides of 'things' and thought some of the Cuties would enjoy the pictures as well!

So glad he was able to fix it for you, I too have a son who is a computer genius, when I am in trouble with my sewing soft wear or computer he is who I turn to.

Oh my and you are very brave! I'm so glad your son was able to fix it and your machine is up and running again. I've never seen the insides so interesting to see what the machine looks like without its 'skin'

impressive inside....I don't think I would dare to do this...but great the problem is fixed !

So glad he got it fixed for you Dolly. They are temperamental little darlings aren't they? Love Chris

I should mention that I brought my machine from the US to Saudi Arabia so there is no guarantee or maintaince coverage and I'm not too sure that the Singer Dealer here is sure of working on Brother machines, that plus my machine is 14 year old so was in need for a cleaning and oiling he he