Hi Cuties! My husband, as I’ve stated before, helps me with my rotary cutting by holding my rulers to not slip. We were making precuts the other day and he said he would like me to make one of his cousins a quilt. 😳 That took me by surprise but I was willing. I told him I don’t know what colors he & his wife like though. Then of course my husband says that color doesn’t matter 😳 just make it out of this we’ve been cutting!

I told him well first of all, some fabrics, not a lot though are for children so I can’t put that in. Then some just clash. He didn’t understand that at all- lol-
Also he has watched You Tube with me before on regular 60 in TV and has remarked ‘they’ in this case meaning Jenny Doan, use too much white in their quilts. I explained you have to have a one color or reads as one color background fabric, to distinguish your blocks or else everything just runs together. He then says it still doesn’t have to be white all the time. Well, I can’t argue about that because I have seen pretty quilts with backgrounds of other colors such as soft yellows, off whites, light blue, etc. However I did tell him white seems to make the other colors in blocks stand out against the bright white crispness. I also told him I’d have to use white in this quilt.
This is a pattern off You Tube called Prairie Flowers, by Jenny Doan of Missouri Star Quilt Company. When we decided this was the one , I thought, I think I have it in one of my Block books from there. So I looked and I did!
It went really fast as it’s a large block, 13 1/2 inches all squared up. I’m sure you notice the odd block in the bottom center. It was one of the first blocks I tried using the pattern. I didn’t want to waste it so I included it. Also, It shows hubby that you need colors to contact not blend with a background or clash ( like here).
When I started pulling my 10 inch squares out of our precuts, I saw most of them were going to be dark and needed a medium contrast. The odd block (bottom center) has pink, that is used in a few other blocks but I believe it worked, because they had darker colors to contrast. The odd block colors match but using them together here does not work.
I don’t think I will remove, rip, un-sew, replace the block but hopefully he understands better about color.
You gonna laugh. All day yesterday we watched Elenore Burns from Quilts in A Day on You Tube until I ( underline I ) lol- was tired of watching-lol Everytime I asked him if he wanted me to change the video, he said no, that’s ok. He would make comments too so I thought….what if he decides he wants to try sewing!😳😉oh NO!!!!-😂🤣lol
So it is made entirely from fabrics on hand, didn’t have to go out and buy anything for the top. Size 89 x 104 inches. I will have to get backing fabric and I have batting. Not as pretty as Jenny used, but this top was ‘free’ scraps, except for white and I don’t own my own fabric shop like her!-lol
Hope all of you are well. Have a nice day!❤️Toogie
2 images:[1] 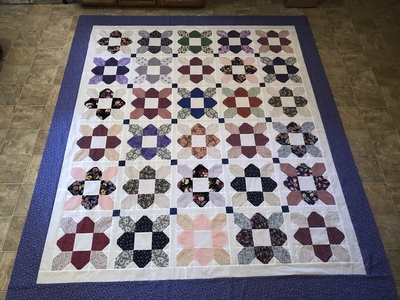 Another great quilt, Toogie!! I'm sure his cousin and wife will be thrilled to receive such a beautiiful quilt. Great that your hubby takes an interest and supports your quilting--mine ,too, is like that even to the point of taking a book in the car so I don't have to hurry at the fabric store! I am making him quilt for Christmas as a surprise so can only work at it when he's out of the house but finally managed to get the top done and a friend took it to our favorite long armer for the quilting.

by toogie 5d ago

If you’re not afraid he will see it on here, I’d sure like to see it! My hub sits in the car but I usually know what I’m looking for and so don’t stay too long.

You might not think of this quilt as perfect, but since it was made with love, it will be treasured. At least that is what I believe. I love the fact that your hubby is watching and learning and expressing his thoughts. I love learning the story behind a quilt. And the teaching too. You are a teacher when you explain a concept like you did with this quilt and colors. Please keep teaching us. We are never too old to learn. Now please rest your back and let it heal.

Thank you and I am resting because I am forced to. Back is a little better today, it will just take time. We turn in CASA quilts Thursday so we will know how many we have to give. I told my husband he may have to bring them for me. The only thing, we sew a label and I don’t have any made or here. Our leader usually has them made and we can sew on the day we turn the quilts in. It’s a small 4x4 heart patch with our groups name above “Comfort Cover”. I know if any of you or any other Cuties were nearby you’d make me some. 😉😄

I wish I could help you. I still struggle with brain fog and stamina. To be honest, I have done very little stitching.

by toogie 5d ago

They are done, yea!

Hi Toogie, well I think it's gorgeous. Your colour combinations really complement each other beautifully. You are so lucky to have your husband help you cut. It's the bane of my life whilst I'm making quilts.
His cousin will love it I am sure. You are so quick to get these quilts sewn out, you've got it down to a fine art. Love Chris

Thanks Chris. I really like piecing a quilt but I like to see it finished too. Lately, I have to put them on hold because I’m out of backing fabrics. I really do detest the cutting out part😩

Of course I Iove your quilt and actually the pink block makes this quilt special and unique. Makes me smile. I am sure your husbands cousin is going to love it also. I Hope your back is going to be better soon.

Thank you A, I feel some better today but will be another laid back day till I feel ok again. At least the pink block is not dead center like a bullseye-lol My husband is so anxious to give it and I have put off ordering the backing. I told him I can’t quilt right now anyway. He says it will take weeks to come in so I’ll be better & ready by then. Yea!!

Lovely quilt!! You are so quick! I guess that is because you have hubby to help cut out! I wish mine would. LOL

Cutting is the part I don’t care for. I cut he holds ruler, but that helps! I guess working at a sewing factory taught me to sew fast. I wish my machine would go faster-lol
Thanks for looking at their quilt top. I still have to order backing.

This is a beautiful quilt. How lucky you are to have a hubby to help with the cutting and to watch tutorials with. I am sure his cousin and his wife will be delighted with this when they receive it. Hugs

I always be sure to thank him during and after. It gives him something to do. Thanks Shirley

Toogie, Looks like a quilt you would design to teach a class with! Gorgeous and I know they will so appreciate it from you (two). Do you need to dip into my fabric stash?

You have a stash of quilting cottons?!!!yea!-lol
You know, there is a lady in my quilting group that told me she wish I had a shop and would teach classes!-😳- I don’t consider myself a teacher. Heck, more times than not I don’t even know what I’m going to do.
I hurt my back (again) this morning so will most likely be laid up again. It happened about a month ago and now again. One day maybe I’ll learn I can’t bend over. Our AC vent is in the hall. I just bent over to clean the grill and change the filter. 🙄 been worthless all day…

I love the fact that he helps you. And, he seems to have definite opinions about fabric, etc. (LOL....he does realize that he is dealing with an expert quilter?). Love this quilt and the story behind it. It is just lovely!! They will be surprised and will love this quilt - well done! Hugs, Laura

I hope so Laura. In facto know they will appreciate the quilt even if they don’t like the fabrics. They are humble people.

What a nice story! Well, even if his ideas of colour combinations have not changed much, your 'lesson' resulted again in a beautiful quilt. I love it.

Thank you M, I hope the cousin & his wife do too. Sorry it was such a long read but you know me-lol- they say every quilt has a story so that is one reason I allow the odd block. It’s part of this quilts story.