Hi Cuties, my husband has booked us a cruise from Sydney (oz) through the pacific islands then Hawaii (warm climate) to Vancouver (heading into cooler weather) then up the inside passage (cold weather). Glacier Bay (freezing point). We live in the tropics average temperature 30% (f) 86% (c). This will be our third trip to Canada & Alaska. Every time I think I have my clothing sorted for a cold climate I still feel cold. I have a Northface Jacket (gortex) with an inner wind jacket (fleece type). I wear thermals as well. Can anyone give me any hints or brand names of clothing that will keep me warm? We were unable to get the 2017 cruise so we are going in 2018 (560 days to get ready). Last trip to Canada it was early September and it snowed and got caught in a snow storm. Thanks in advance for your help. 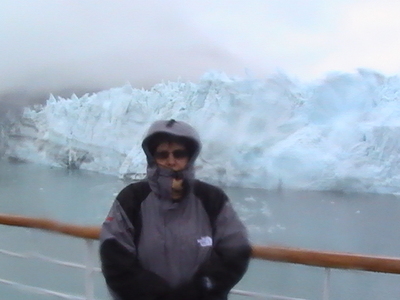 You have been given great advice. When we lived in North Dakota for 3 winters, I survived with a long heavy wool coat, heavy wool socks, a double layered fleece scarf I had embroidered, thick suede mittens and the foot and hand warmers you can slip into boots and pockets or mittens. The fleece liner will feel cozy and help with warmth as will the thermal underwear. But please do get the longest coat you can find to wear rather than a jacket. Go have a wonderful time and enjoy the incredible scenery.

I felt the cold unbelievably when I went to England in their summertime, while some people were in swimming I was rugged up in a sheepskin lined overcoat, winter hat and gloves!!! LOL!!!

When I went to the States and Canada, for Christmas in winter, I wore thermal SOCKS, extreme thermal long-johns and Spencers and Parachute fabric, flannelette lined tracksuits, which I purchased as soon as we arrived, also had thermal fur lined gloves and woollen ear muffs that looked like headphones and folded up, my coat was a suede leather, sheep's wool lined with a hood.
Temperature at Niagara Falls was 33* below zero with wind chill, we could only stay outside for 10-15 minutes and in that brief time my Sony movie camera became damaged and only recorded everything in black and white and has never worked since.
I was told the secret is in the thermal socks and good solid fur-lined boots.
I almost forgot, when we arrived in Pennsylvania I was wearing a sheer summer frock and sandals!!!!
I kid you not, I nearly froze getting from the terminal to the heated car and our very first stop was a shopping centre to purchase the suitable winter clothes mentioned above.

I had never seen real snow before then, having avoided all trips to Snow offered here, and the coldest I could remember was a trip to Canberra, back in 1964, on a day when the maximum temp was 33*F and we all walked around wrapped in blankets.

I absolutely hate being cold, but during all my trips to Canada and the States I didn't feel half as cold as I had on my trip to England, so I figure the advice I was given about the socks must have worked????

Maybe you could get Cuties from the States to help you by suggesting items to purchase during their upcoming winter months or look for Damart thermal gear here in Aus.
hugs n roses, Meganne

How lovely lucky you

I really envy you. Have always wanted to have a trip to Canada and see the glaciers. No use me trying to advise you on warm clothes. Living in S. Africa a jersey is all we need. Have a wonderful trip in 2018

Lucky you! Your trip makes mine sound blah...Although I don't envy you the cold. I cannot take cold climate and was wondering myself, if I will be warm in Maine by the harbors, in a couple weeks. I could not make a trip like this with all the ice around you. No reason we can't see you all bundled up! Carolyn or Loralye may can tell you about clothing, as they are from Canada, and Michelle, probably more Cuties too. How long will you be on the cruise?

24 days on the first cruise, 7-10 days on the next cruise, we are still in the early stages as the tours aren't out yet. There is 6 of us so far everyone wants to join us. My Husband's brother also wants to see Graceland. We will do the Rocky Mts as well.

Graceland I am told is now a terribly disappointing, crumbling house. compared to say, 10 years ago Check around before making that effort. Our tour bus stopped there and I spent my 45 mins. in the gift shop. Those who paid for the house tour said 1/2 hour was plenty of time to see anything and that it sort of burst their bubble as far as memories or fantasies of Elvis.

thank you. I will let my brother in law know about Graceland.