Rainy winter day here. Needed a little something to brighten up the kitchen so decided to spruce up a cheapie cotton tea towel from supermarket with this design from Emblibrary. (over 57000 stitches & 23 or 24 colour changes)

First pic is the finished tea towel hanging over the oven door handle; second picture was the finished tea towel sitting flat on the ironing board just after removing the tear-away from around the edges.
Mistake 1: tried to multitask this between rainy day chores, exercising my little dogs and repairing some curtains: result - took considerably longer than the 2 hours that my machine suggested it would take - all day -
Mistake 2: had not prepared an extra bobbin to swap over part of the way through stitching: result had to stop to wind another bobbin part of way through
Mistake 3: turned my back on the bobbin winding to stitch curtains on other machine until all was suddenly quiet a little sooner than expected when I then discovered embroidery bobbin thread - piles of it had been wound around the bobbin winder below the bobbin instead of onto the bobbin - a grand tangled mess - took a lot of time & patience to get all the bobbin thread untangled - luckily it does not seem to have done any harm to the bobbin winder which worked just fine next time.
Mistake 4???? I did not want to use cut-away stabilizer on a tea towel because it would make that part of the teal towel too bulky for drying glassware etc but I suspect my choice to use plain medium weight tear-away may have been wrong - maybe I should have used iron-on stabilizer because although securely and squarely hooped, the fabric has pulled out of plumb in the middle a bit, giving the fabric stripe a bit of a wobble.
What stabilizer would you have used?
At least it is finished (allbeit imperfect.)
Guess it has been "just one of those days...."
2 images:[1] 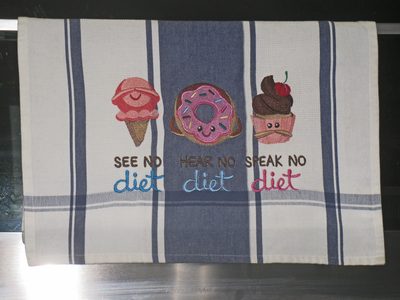 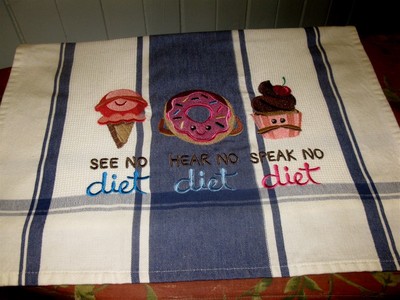 I think we've all had 'one of those days' and most likely will again. Thing is you kept on and this looks fantastic. I believe this must be my motto!-lol-see hear speak, no diet, no diet, no diet!--Great job!!!

thanks, to you and everyone for your comments and for making me smile.

I agree with Betsy & it looks like a fun towel!

I saw the pictures first, read some comments, and then read your description of the process. Admittedly, backwards thinking! Anyway, I did not see the "wobble" in the fabric until you pointed it out. It looks fabulous!

thanks, might try again on a tea towel that doesn't have stripes

Ugh! I've done that bobbin problem and it's not fun. I would have used the tearaway and floated a second tearaway beneath the towel. When you tear away, tear away one full layer and then the next.

thanks for your good advice - will try that

Looks pretty good to me the small wave is not much. At least you stayed dry and weren't bored.

thanks, but actually - I got soaking wet between stitching moments because one of my little dogs is currently suffering a balance disorder (under vet treatment) and was needing to be carried outside several times to answer nature's call and carefully supervised to prevent him falling badly - his weather - beater coat was water-proof but my old nylon raincoat (even though it had been sprayed with KIWI water proofing spray a week ago) was not - but you are right that I certainly wasn't bored.

love it i NEED this design wheres it from lol hugs

thanks - it came from emblibrary.com; when not stitching or busy with my doggies, I also like baking & decorating cakes so I figured this design was a pretty good & funny motto for my kitchen.

Nice design. That brings me a smile on my face😊
Good job!

What a day! Nice design and great job...

What a story ! But I sure like the result ! Lovely design !

It looks great! " Just one of those days" is everyday at my house because it's always multi tasking.. my sewing machine and my embroidery machine are in 2😞 different RMS and there lays the problem lol . No one would know you had problems by looking at your great sew out. I always use a light tear away on the lighter cheap dish towels but then I usually use a light airy design on those also. /Lillian

Sewing & embroidery machines in separate rooms must be frustrating at times - I think that would send me truly crazy; thanks for kind words and helpful advice - yes a lighter weight design probably would have been better suited to the fabric - still it is a bit of fun to have this design hanging in the kitchen.

After all that , at least this design will be a smile !

hi crazystitcher, who says which always folds everything and it no problems with the embroider, tell a lie, with me everything goes also not always perfectly, and sometimes it also spins. nevertheless, your result looks good and cute :-)

Crazy stitcher, your designs are lovely. As it is quite dense stitching it may look better as a decoration after all the trouble you've had to finish this. As Chris has said, light tear away, is what I also use. Sometimes we have to have trial and error. Thicker towels I have used WSS with success. Sandra.

Dear crazystitcher, I only ever use a light tear away when I'm sewing designs on tea towels. That way it doesn't distort designs when it's being removed. Great job and stitch-out. Love Chris

thanks both for your good advice and kind words

Thanks for sharing your experience with getting the tea towel embroidered !!! Just wonder it 2 layers of Washaway ( used for lace making ) would work??. Lovely Design. Janette

thanks, will try that idea next time.

oh dear, what a trying time you have had - trying to multitask. That is a lot of stitching. But the end result looks great - way too nice to use.