Bevintex posted hers 2 days ago, I just loved it, had to make one. This is the smallest bag. Just ordered another one a little bigger. I think I can get my phone in a bigger one.
Thanks Bevintex. 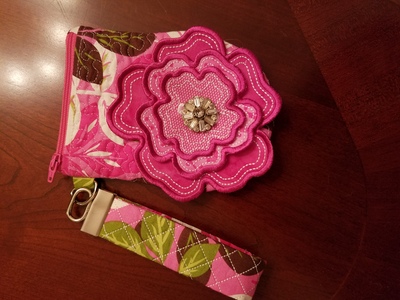 This is so cute---where have I seen this design file before?? I know one of my newsletters but just can't place it.

OPW or the one everyone is making in projects

Terrific job! Love the fabric you used and the wrist strap is a great addition!

wow, I just love this bag

Such a delightful bag you've done& these colors look great together too. Thanks for sharing your work. :>D

Wondered would someone please tell from where the bag design was found?

thank you. i just made another one, the bigger one, with 4 petals.

I love the fancy button in the middle, adds a bit of bling

Oh! these are all looking gorgeous, well done. Love Chris

It is very beautiful. I really want to do.

very pretty, I have to get on this & make mine too! ~hugs~

i hope you are going to post it, I love seeing the different colors.

Love seeing everyone's interpretation of this design......they are all lovely and the fabrics are so pretty.......

I know, I hope more people do them and post them.

Very cute and the strap is a great addition.

Lookin good in this neighborhood/Lillian

This is really cute, love the pink.

thank you, I saw you did the flower also. They really are pretty aren't they. I think the next time I am going to do what you did and skip the button hole and stitch them all together. That is a better idea.

Mgregg01 I think Queen used a snap on hers but I may be wrong. A snap would be easier than a buttonhole, I would think, wouldn't you? Either way they are pretty.

the next one I will sew them all together. They move and I would like them to stay in place. If I was really going to change them then I would still do the button hole. The other thing I was thinking, I wonder if the machine would sew through all of the layers (meaning all 3 layers) then they would stay in place and could be removed.

I'm just so glad you posted it. I just ordered the largest bag, But I might narrow it a little. Thanks again.

I would love to see them. I'm not very good with mixing colors, so I love the ideas.

This is so pretty! I love the pink. What size is this one?like the wrist strap too!