Thanks to everyone who has been so understanding and supportive.
Sorry for not sharing this news sooner as have been pre-occupied with caring for my dear Goldielocks.

Good news: test results showed lump was an auricular polyp - it did need to come out as would have completely blocked her ear canal; there is a risk it could grow back but it is NOT cancer so won't start popping up elsewhere.

Not so good news: the fact she was so poorly after the surgery and took so long to pick up suggested a new problem; blood tests and x-rays have shown a damaged enlarged heart which is so enlarged it is pushing her oesophagus up high out of alignment and some fluid starting to accumulate in her lungs; she has started on some medications and will be going for another check-up and another x-ray this week to see if there is any improvement.
I know that, in many people's eyes she might be "just a dog", but to me she is much more, so, if you can please keep her in your positive thoughts and maybe your prayers, I would be most thankful.


Thanks very much to everyone who wished her well.


So far so good. Brought Goldielocks home last night and she was soon busy snoring - still very groggy and her feet give way under her when she attempts to stand - but Vet said best place for her was home. She had a number of blood tests taken prior to surgery; lump has been removed and sent away for testing; also a few teeth removed and rest scaled & polished while she was under the anaesthetic. Have come home armed with antibiotics & pain killers to started today plus a plastic Elizabethan collar to use if she attempts to scratch or paw at the ear while healing plus instructions for no food last night, then start on soft food only for next few days. She has been pretty down and out all day today and not enthusiastic about eating or drinking, which has had me worried, but at midnight tonight when she saw me having a late-night cuppa and a scotch finger biscuit she suddenly brightened up and decided she wanted a piece of the biscuit that I had just dunked in my tea - so that must be a positive sign that she is going to be doing better tomorrow. Won't know test results for about a week, but thankful to be sharing her company again now.


Thanks for the hint that a different browser to I.E. might work better for uploading pictures ; just used Firefox this time and these two pictures of Goldielocks seem to have uploaded ok.


Sorry if I have prattled on a bit - I imagine you have all guessed by now that to me she is very special.
2 images:[1] 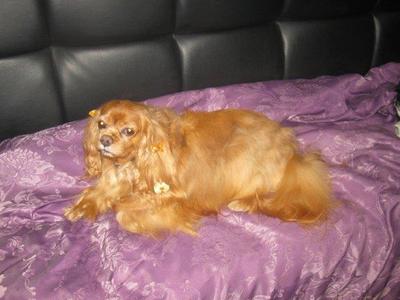 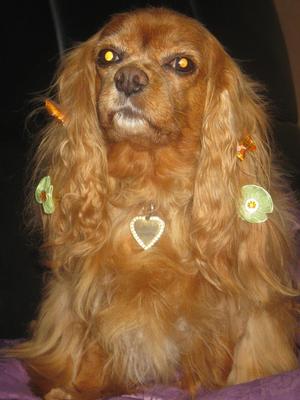 What a gorgeous girl, your Goldie Locks is........will pray that her issues will stabilize and she will once again resume her daily and loving life with you.......

I am keeping your sweet little dog in my prayers. All of my pets are family and there is no limit to what I would do to save their lives. Bless you for doing the same. Hugs, Sharon

My heart goes out to you. I so hope things will turn out well for you both. Goldielocks looks like a beautiful dog inside and out.

Such a pretty dog! All dog owners do understand that she's a member of the family! Even when my son's dog, that was a bad dog to keep, I cried. Hope she recovers completely.

She is beautiful...praying for a speedy full recovery...

From reading all of the comments posted I don't believe any one here thinks "she might be 'just a dog' as it seems we all love our little furry family members and truly understand just what Goldilocks means to you! My sister had two of the Cavalier King Charles Spaniels in her family and loved them dearly. Your Goldilocks is just precious and I am praying for your family! Love her little hair accessories and necklace ;)

Poor baby!! My heart breaks when they are not feeling well. Hope she will soon be on her feet and good again ... at least for a while longer. Prayers are with you all! Suzanne

Our animals are so very special. I wish Goldielocks many more happy years with a very caring mum.

What beautiful color your Goldielocks is. She may be as you put it 'just a dog' but she is yours and that makes her special. Will keep positive thoughts going to heaven for the little girl and you.

Have just added a news update to Goldielock's progress - by editing the previous update and adding the new news to the top of the old update - hope this is ok and doesn't make reading it too tedious - thanks again, Cuties for your support.

she is a special cute dog :)

I can see why you love her so, Goldielocks (cute name) is a beautiful dog. I am very happy to hear that she is on the mend...now you can rest a little easier too. ~hugs Loralye~

Aww! look at that beautiful face. I love small dogs, is she a Cocker Spaniel? Love Chris

Thanks - she is a Cavalier King Charles Spaniel.

Wishing Goldilocks a speedy recovery. She is beautiful

She's beautiful and I love her jewelry. ;)

Such a sweet face.

She is beautiful and as I can see well loved. Hoping she will be on the mend now and there will be good results from the lab reports/Lillian

I can see why she is special to you, she is beautiful.! I pray for more good news when you get the test results back.

Understandably. She is beautiful. Best wishes for you and her.

beautiful wee dog , you can see her love for you in her face ..

She is a sweety and her name is perfect for her. Hoping and praying that test results will be good.

We love our fur babies!! I am happy she is back home and I hope she feel better everyday!! Hugs, Laura*

So glad she is back home with you...praying for a full recovery...