I know its not sewing, but I've just finished my first pair of "Knitted Knockers" :-) for breast cancer ladies that have had a mastectomy. A friend had a mastectomy and the prosthesis was very uncomfortable, sweaty and expensive - If only I had known about this when she was still alive. I hope these will be a blessing. If you want to know more you can go to the Knitted Knockers website - http://www.knittedknockers.org/ 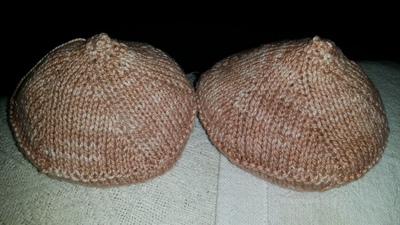 Great idea and would be welcome, soft and would fit well, I would imagine.

what a fantastic idea well done

You are a real angel to find, make and post these and this link. I'm sure everyone who receives the pairs truly feel blessed. Thanks for sharing.

Great idea. I had a call from a woman who's husband worked with me years ago. She asked if I could make her some false boobs to put into her bra. She had a mastectomy 30 years ago and was having shoulder problems and the ones she had were just too heavy. I weighed them and it was about 500 grams each. Anyway I thought well why not have a go. Made a test run with some interlock fabric and stuffed it with pillow filling. Then placed it into the bra and put it on my dressmakers dummy on the back. This way I had a flat chest to work with. One of the problems she had with some rubber inserts was that even though they were light enough they would go in and not pop back out after driving with the seat belt. This way I could poke the boobies and make sure they stayed out.
When she came to see the test run she was thrilled at the fit and the size was just right and looked natural. It was triangle and I just rounded the top a bit. Best part is they are fully washable.

I can see how useful these would be. I'd guess they might make them in different sizes. I'd probably need to practice a little. Fabulous idea. Thanks for posting.

good job on these and giving others an idea that they never thought of!

Thanks for sharing the link!

I am a mastectomy/cancer survivor since 1991---wished this was around then. Thank you for the site. Don't knit but might try crochet verson. Nice to wear around the house even after all these years just for comfort. Thank you for this listing.

Thanks for helping those in need be blessed hugs

Wow...I have not heard of this before...what a great idea! Thank you for sharing such an inspirational gift!

Great job. What a wonderful thing you are doing.

I had not heard of these before. Great job and thanks for sharing.

They look quite the part. Great job

Wow, who'd have thought! Looks like a great idea, though and these look really neat. Well done!

They look the part! Well done!

Nice work. Did you do the increases not only at the beginning of each needle but in the middle as well, in alternate rows? The one on the KK site looks more triangular than yours. I think I like yours better.